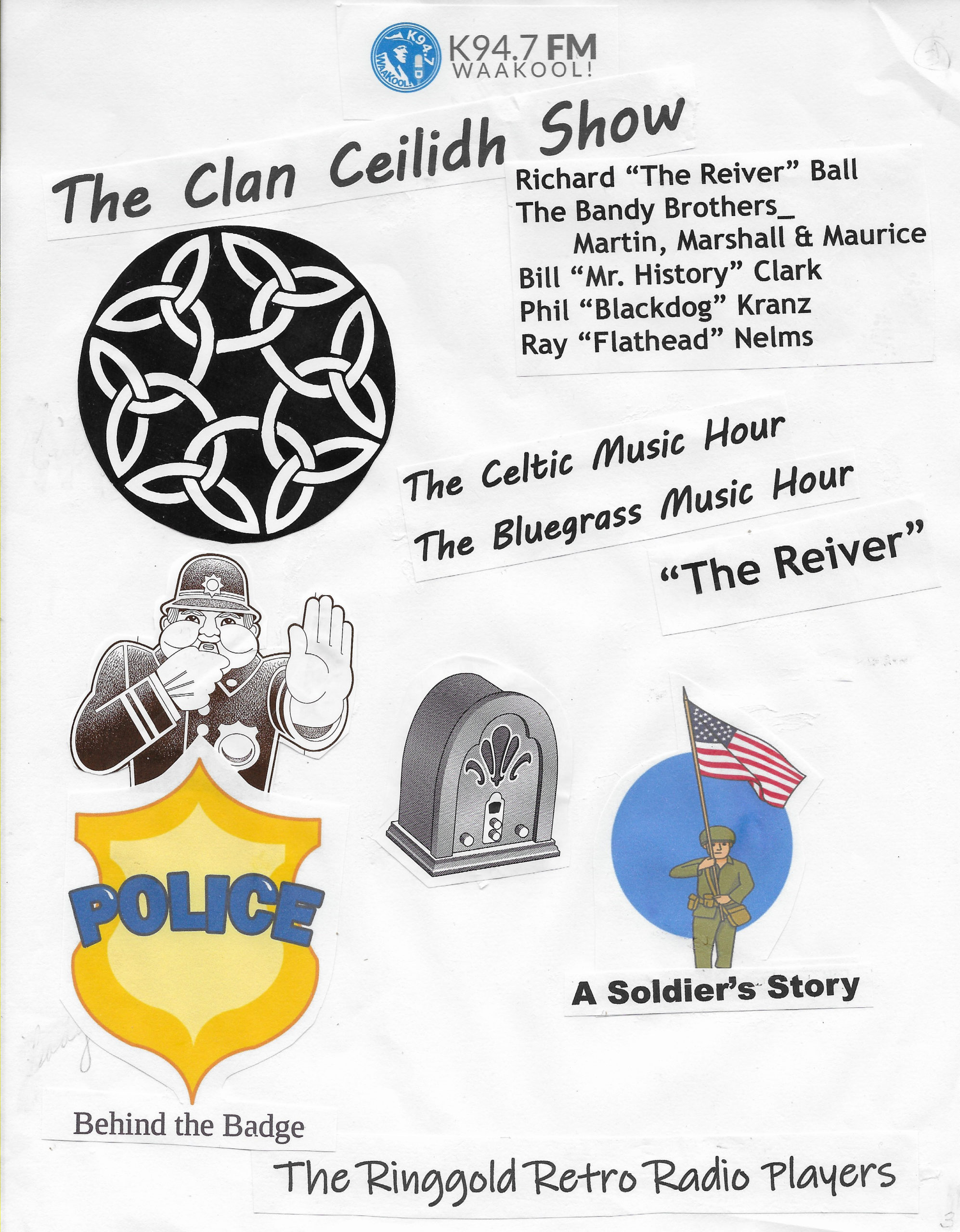 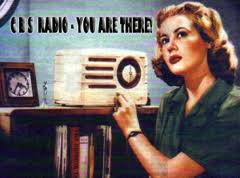 You Are There takes historic events and dramatizes them with “live radio” coverage. The daily field reports had an emotional impact that were reporting at it’s best. The show, which was originally called “CBS is There”, featured reporters who were actual wartime correspondents. 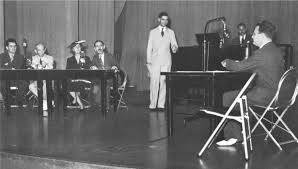 Information Please was an American radio quiz show, created by Dan Golenpaul, which aired on NBC from May 17, 1938 to April 22, 1951. The title phrase was contemporarily used to request information such as directory assistance and time of day from telephone operators.

The series was moderated by Ben Grauer. A panel of experts would attempt to answer questions submitted by listeners. If the panelists were stumped, the questioner earned five dollars and a complete edition of the Encyclopædia Britannica. As the years went by, the prize money increased accordingly. 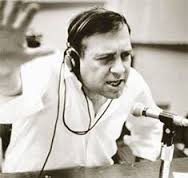 Shepherd began his broadcast radio career onWSAI in Cincinatti, Ohio in 1948. From 1951 to 1953 he had a late-night broadcast on KYW in Philadelphia, Pennsylvania, after which he returned to Cincinnati for a show on WLW. After a stint on television (see below), he returned to radio. “Shep,” as he was known, settled in at WOR radio New York City, New York on an overnight slot in 1956, where he delighted his fans by telling stories, reading poetry (especially the works of Robert W. Service), and organizing comedic listener stunts. The most famous of the last involved creating a hoax about a non-existent book, I, Libertine, by the equally non-existent author “Frederick R. Ewing”, in 1956. During a discussion on how easy it was to manipulate the best seller lists, which at that time were based not only on sales but demand, Shepherd suggested that his listeners visit bookstores and ask for a copy of I, Libertine which led to booksellers attempting to purchase the book from their distributors. Fans of the show eventually took it further, planting references to the book and author so widely that demand for the book led to it being listed on The New Your Times Best Seller lis. Shepherd, Theodore Sturgeon and Betty Ballantine later wrote the actual book, with a cover painted by illustrator Frank Kelly Freas, published by Ballantine Books. Among his close friends in the late 1950s were Shel Siverstein and Herb Gardner. With them and actress Lois Nettleton, Shepherd performed in the revue he created, Look, Charlie. Later he was married to Nettleton for about six years.[7]

When he was about to be released by WOR in 1956 for not being commercial, he did a commercial for Sweetheart Soap, not a sponsor, and was immediately fired. His listeners besieged WOR with complaints, and when Sweetheart offered to sponsor him he was reinstated. Eventually, he attracted more sponsors than he wanted—the commercials interrupted the flow of his monologues. Ex WOR engineer, Frank Cernese, adds: The commercials of that era were on “ETs”—phonograph records about 14” in diameter. Three large turntables were available to play them in sequence. However, Shepherd liked the engineer to look at him and listen when he told his stories. That left little time to load the turntables and cue the appropriate cuts. That’s when he started complaining about “too many commercials”! He broadcast until he left WOR in 1977. His subsequent radio work consisted of only short segments on several other stations including crosstown WCBS. His final radio gig was the Sunday night radio show “Shepherd’s Pie” on WBAI-FM in the mid-1990s, which consisted of his reading his stories uncut, uninterrupted and unabridged. The show was one of WBAI’s most popular of the period. In addition to his stories, his shows also contained, among other things, humorous anecdotes and general commentaries about the human condition, observations about life in New York, accounts of vacations in Maine and travels throughout the world. Among the most striking of his programs was his account of his participation in the March on Washington in August 1963, during which Dr. Martin Luther King gave his “I Have a Dream” speech, and the program that aired on November 25, 1963—the burial day of President John F. Kennedy. However, his most scintillating programs remain his oftimes prophetic, bitingly humorous commentaries about ordinary life in America.

Throughout his radio career, he performed entirely without scripts. His friend and WOR colleague Barry Farber marveled at how he could talk so long with very little written down. Yet during a radio interview, Shepherd once claimed that some shows took several weeks to prepare. On most of his Fourth of July broadcasts, however, he would read one of his most enduring and popular short stories, “Ludlow Kissel and the Dago Bomb that Struck Back,” about a neighborhood drunk and his disastrous fireworks escapades. In the 1960s and 1970s, his WOR show ran from 11:15 pm to midnight, later changed to 10:15 pm to 11 pm, so his “Ludlow Kissel” reading was coincidentally timed to many New Jersey and New York local town firework displays, which would traditionally reach their climax at 10 pm. It was possible, on one of those July 4 nights, to park one’s car on a hilltop and watch several different pyrotechnic displays, accompanied by Shepherd’s masterful storytelling. (wikipedia.org) 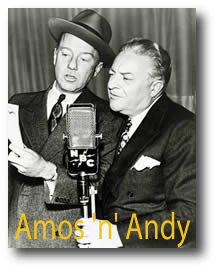 Amos ‘n’ Andy is a situation comedy based on stock sketch comedy characters but set in the African-American community. It was very popular in the United States from the 1920s through the 1950s on both radio and television.Amos and Andy began as one of the first radio comedy series, written and voiced by Freeman Gosden and Charles Correll and originating from station WMAQ in Chicago. After the program was first broadcast in 1928, it grew to become a huge influence on radio series that followed. The show ran as a nightly radio serial from 1928 until 1943, as a weekly situation comedy from 1943 until 1955, and as a nightly disc-jockey program from 1954 until 1960. 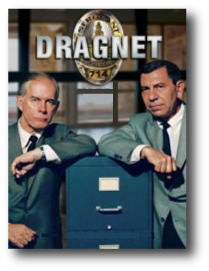 Dragnet was perhaps the most famous and influential police procedural drama in media history. The series gave millions of audience members a feel for the boredom and drudgery, as well as the danger and heroism, of real-life police work. Dragnet earned praise for improving the public opinion of police officers.Actor and producer Jack Webb’s aims in Dragnet were for realism and unpretentious acting. He achieved both goals, and Dragnet remains a key influence on subsequent police dramas in many media.

The show’s cultural impact is such that even after five decades, elements of Dragnet are known to those who have never seen or heard the program:

The ominous, four-note introduction to the brass and tympani theme music (titled “Danger Ahead”) is instantly recognizable (though its origins date back to Miklós Rózsa’s score for the 1946 film version of The Killers).

Another Dragnet trademark is the show’s opening narration: “Ladies and gentlemen: the story you are about to hear is true. Only the names have been changed to protect the innocent.” This underwent minor revisions over time. The “only” and “ladies and gentlemen” were dropped at some point, and for the television version “hear” was changed to “see”. Variations on this narration have been featured in many subsequent crime dramas, and in satires of these dramas (e.g. “Only the facts have been changed to protect the innocent”). 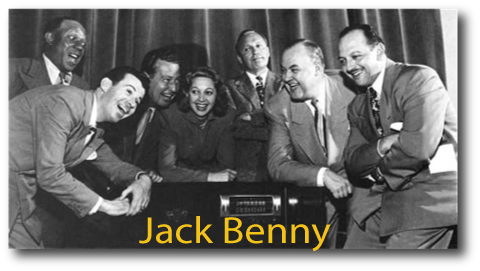 Jack Benny was widely recognized as one of the leading American entertainers of the 20th century, Benny played the role of the comic penny-pinching miser, insisting on remaining 39 years old on stage despite his actual age, and often playing the violin badly.Benny was known for his comic timing and his ability to get laughs with either a pregnant pause or a single expression, such as his signature exasperated “Well!” His radio and television programs, tremendously popular from the 1930s to the 1960s, were a foundational influence on the situation comedy genre. Dean Martin, on the celebrity roast for Johnny Carson in November 1973, introduced Benny as “the Satchel Paige of the world of comedy.” 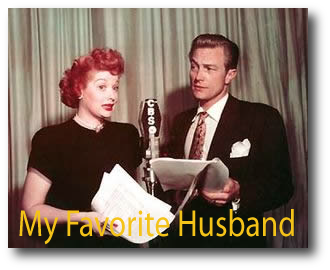 My Favorite Husband began on CBS Radio with Lucille Ball and Richard Denning as Liz and George Cugat. After a few early episodes, confusion with bandleader Xavier Cugat prompted a name change to Liz and George Cooper. The cheerful couple lived at 321 Bundy Drive in the fictitious city of Sheridan Falls and were billed as “two people who live together and like it.” The main sponsor was General Foods’ Jell-O, and an average of three “plugs” for Jell-O were made in each episode, including Lucille Ball’s usual sign-on, “Jell-O, everybody!”The program, which aired 124 episodes from July 23, 1948 through March 31, 1951, initially portrayed the couple as being a well-to-do banker and his socially prominent wife, but three new writers — Bob Carroll, Jr., Madelyn Pugh and Jess Oppenheimer — took over the writing, changed the couple’s name to Cooper and remade them into a middle-class couple, which they thought average listeners would find more accessible. 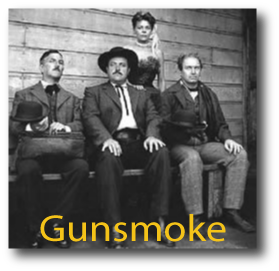 Gunsmoke is an American radio and television Western drama series created by director Norman MacDonnell and writer John Meston. The stories take place in and around Dodge City, Kansas, during the settlement of the American West.In the late 1940s, CBS chairman William S. Paley, a fan of The Adventures of Philip Marlowe radio serial, asked his programming chief, Hubell Robinson, to develop a hardboiled Western series, a show about a “Philip Marlowe of the Old West.” Robinson instructed his West Coast CBS Vice-President, Harry Ackerman, who had developed the Philip Marlowe series, to take on the task.

The radio version ran from 1952 to 1961, and John Dunning writes that among radio drama enthusiasts “Gunsmoke is routinely placed among the best shows of any kind and any time.” The television version ran for 20 seasons from 1955 to 1975, and was the United States’ longest-running prime time, live-action drama with 635 episodes until it was surpassed in 2010 by Law & Order (with 20 seasons, 456 episodes). At the end of its run in 1975, Los Angeles Times columnist Cecil Smith wrote “Gunsmoke was the dramatization of the American epic legend of the west. Our own Iliad and Odyssey, created from standard elements of the dime novel and the pulp western as romanticized by Buntline, Harte, and Twain. It was ever the stuff of legend.” 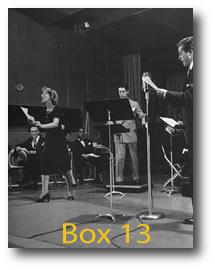 Box 13 was a syndicated radio series about the escapades of newspaperman-turned-mystery novelist Dan Holliday, played by film star Alan Ladd. Created by Ladd’s company, Mayfair Productions, Box 13 premiered in 1947. In New York City, it first aired December 31, 1947,[1] on Mutual’s New York flagship, WOR.To seek out new ideas for his fiction, Holliday ran a classified ad in the Star-Times newspaper where he formerly worked: “Adventure wanted, will go anywhere, do anything — write Box 13, Star-Times.” The stories followed Holliday’s adventures when he responded to the letters sent to him by such people as a psycho killer and various victims.

Among the 52 episodes in the series were such mystery adventures as “The Sad Night,” “Hot Box,” “Last Will And Nursery Rhyme,” “Hare And Hounds,” “Hunt And Peck,” “Death Is A Doll,” “Tempest In a Casserole” and “Mexican Maze.” The dramas featured music by Rudy Schrager. Russell Hughes, who had previously hired Ladd as a radio actor in 1935 at a $19 weekly salary, wrote most of the scripts, sometimes in collaboration with Ladd. The partners in Mayfair Productions were Ladd and Bernie Joslin, who had previously run the chain of Mayfair Restaurants. 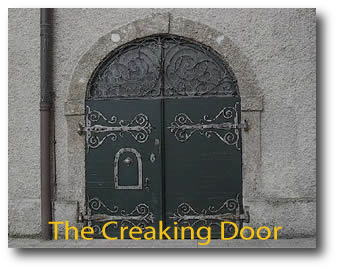 The Creaking Door was South African Radio’s attempt to create a compelling program of highly suspenseful, dramatic thrillers with a supernatural bent for their sponsor, State Express Cigarettes. Some commentators insist it was conceived as a spin-off of the already successful Inner Sanctum episodes that had been syndicated for broadcast in Australia and South Africa during the 1950s. Given the format, one can see the inference, but in fact The Creaking Door stands on its own as a unique, well-produced, engaging supernatural thriller series on its own merit.